As the EV market grows exponentially, many businesses and organizations are taking advantage of vendor partnerships to help facilitate and fund foundational projects and initial growth activities.

Here are six successful EV vendor partnership examples, including links to articles and case studies where you can find out more.

Currently is entirely mobile and on-demand and can be completely contactless as well. Using the Currently mobile app, Kia owners set a time and location to receive service. The Currently technician arrives when and where scheduled to deliver a charge for up to 100 miles or 80% of battery capacity, whichever is less.

Kia is covering costs for all enrolled Kia EV owners for the first two months. After that, owners can elect to continue at their own expense. Tiered package pricing options include a monthly membership fee (ranging from $4.99 to $29.99) plus usage (ranging from $0.51 to $0.69 per kWh). There is no limit on the number of deliveries each month.

Convenient, accessible charging is considered essential to increasing EV adoption. Customer response has been overwhelmingly positive. The partners plan to expand the program as Currently adds additional service areas, and Dallas is the next location planned. Eneco partnered with GreenFlux to reduce the cost of managing its charging network and to better keep pace with the industry’s rapid technological advancements. The partnership involves Eneco using GreenFlux’s EV charging platform (with API integration to Eneco’s existing CRM and ERP systems) to operate as a charge point operator and service provider and to handle transactions.

Eneco performs around 144,000 transactions monthly across all 13,000 charge points using the platform. Additionally, over 39,000 EV drivers use GreenFlux-powered Eneco charge cards for complete interoperability. Eneco considers the result a cost-efficient, state-of-the-art system that can constantly evolve without taking anything away from its core business.

Up to 85 percent of all EV charging occurs at home, mostly in single-family homes. However, in Columbus, Ohio, an estimated 40 percent of households reside in multi-unit dwellings (MUDs), such as condos, townhomes, and apartment complexes.

Smart Columbus is a partnership of the City of Columbus, American Electric Power, The Ohio State University, automakers, automobile dealers, and private and public companies. Seed funding came in the form of a $10 million grant from the Paul G. Allen Family Foundation, followed by a $40 million grant from the U. S. Department of Transportation.

To increase EV ownership by five times (one of the group’s goals), Smart Columbus recognized that the region’s charging infrastructure needed a dramatic expansion. Focusing on MUDs, they worked to increase the number of charging stations by nearly 1,000 ports. The group found that financial support helped overcome many barriers to installing EV infrastructure at MUDs.

Smart Columbus has met many of its goals by partnering with more than 100 private, public, and academic organizations. City leaders committed to installing 90 Level 2 chargers at MUD sites and created rebates to incentivize property owners to do the same on their properties. Interest in the program from developers was so great that they extended the original one-year program to a second year.

The group has summarized much of their work at AccelerateYourCity.com, an online best practices playbook. The digital playbook provides advice and resources to help others learn about and replicate the programs proven in Columbus. Volvo Cars and Waymo have partnered to develop self-driving vehicles that can operate safely without routine driver intervention. The companies will integrate Waymo’s Driver self-driving technology with the Volvo vehicle platform. Waymo is developing the artificial intelligence and hardware for the new vehicle (including cameras, lidar sensors, and radar), with Volvo designing and manufacturing the end product.

Although a launch date has yet to be announced, Volvo has agreed with Uber Technologies to provide their autonomous-driving Volvo vehicles for use by the ride-sharing service when they become available.

Volvo had previously announced that it would begin offering Luminar lidar sensors in its modular vehicle architecture starting in 2022.

The community of Bronzeville, ComEd, Innova EV, and Germany-based Eluminocity GmbH partnered on a ride-sharing mobility pilot for senior residents,  part of ComEd’s “Community of the Future” initiative.

One out of every 10 Cook County residents (438,000 people) lives in an area unserved by fast or frequent bus and train service. Widespread car ownership is not viable due to the area’s low average income. Seniors, veterans, and those who no longer drive have a tough time; e.g., a 1.3-mile trip to the doctor via two buses takes an hour.

Initially launched in late 2017, the pilot program paused in 2020 due to COVID-19 and has relaunched in 2022. Innova EV is in charge of mobility services, while Eluminocity GmbH provides charging services.

A zero-emissions, 100% electric Dash EV provides transportation for Bronzeville’s senior residents. The Dash is an IoT 4G and Wifi-connected EV with more than 50 built-in sensors to gather data about the car’s performance and ridership statistics. It gets about 150 miles per charge and has a maximum speed of 35 mph. A Level 2 EV charging unit, installed at a nearby business, supports the Dash vehicle.

The initial portion of the ride-sharing pilot provided 225 seniors in the Bronzeville neighborhood with affordable, readily accessible transportation. The average trip distance was 0.7 miles over an average length of 10 minutes. Utilizing Innova EV’s Dash EV, the initial pilot offset 1,464 pounds of CO2.

The program reduced the previous 1-hour trip to the doctor via two buses to a 10-minute ride with Dash. Instead of walking to a bus stop in Chicago’s temperature extremes, seniors could avoid the elements by getting picked up at or near their residences. The program shared trip destination, EV charging patterns, ridership, energy consumption, and carbon emission savings data with the City of Chicago and critical stakeholders.

All in all, the community realized over $20,000 in economic benefit during its first year through resident transportation savings, rent for storing the vehicle at the garage of a local business, and wages earned by locally hired staff.

PIDC, the public-private economic development corporation in Philadelphia, has placed the first order for an all-electric, self-driving Lightning shuttle with the Perrone “Tony” technology. The shuttle will transport employees and visitors within the Philadelphia Navy Yard, a 1,200-acre urban development.

No matter your organization or EV-related project, a potential vendor partnership is likely available to help you enter, expand or innovate within the EV industry. As a first step, review the U. S. Department of Energy’s Alternative Fuels Data Center website or contact your state energy program or local power company.

Featured photo by Mediensturmer for Unsplash.com.

Sign up to receive the latest blogs in your inbox! 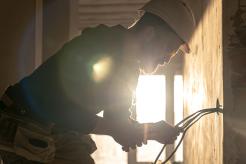 How To Monetize Your EV Charging Stations